What’s the point of producing a studio show on-site at a major event, if not to paint the picture of the host locale and to engross the viewer in all that makes it unique. That’s the belief of Fox Sports’ VP, Operations Rod Conti, whose team has outdone themselves with a set to behold on the sands of South Beach in Miami for coverage surrounding Super Bowl LIV.

Midweek FS1 studio shows (like Skip and Shannon: Undisputed, First Things First, The Herd, Speak For Yourself, and Lock It In) along with game day staples like Fox NFL Sunday will all churn out hundreds of hours of content from the nearly nine acres of production and operations support workspace that Fox has stretched across the southern reaches of Miami Beach. And its all offering a fresh, fun, and eclectic feel for what makes this region of the country so special.

“Sense of place is huge,” says Conti, who has overseen many achievements in set design for Fox, including memorable structures at the 2018 FIFA World Cup in Moscow’s Red Square and the 2019 FIFA Women’s World Cup in Paris overlooking the Eiffel Tower. “What’s synonymous with that place? What’s the first thing that you think of? When we were designing this, I said, ‘this is what I want: Ocean Drive, art deco, palm trees, the sea. What do people think of first when they think of Miami. It’s this beach.

A 55-ft. Technocrane not only supplies sweeping aerial images of the sets, it also is capable of display augmented reality graphics. 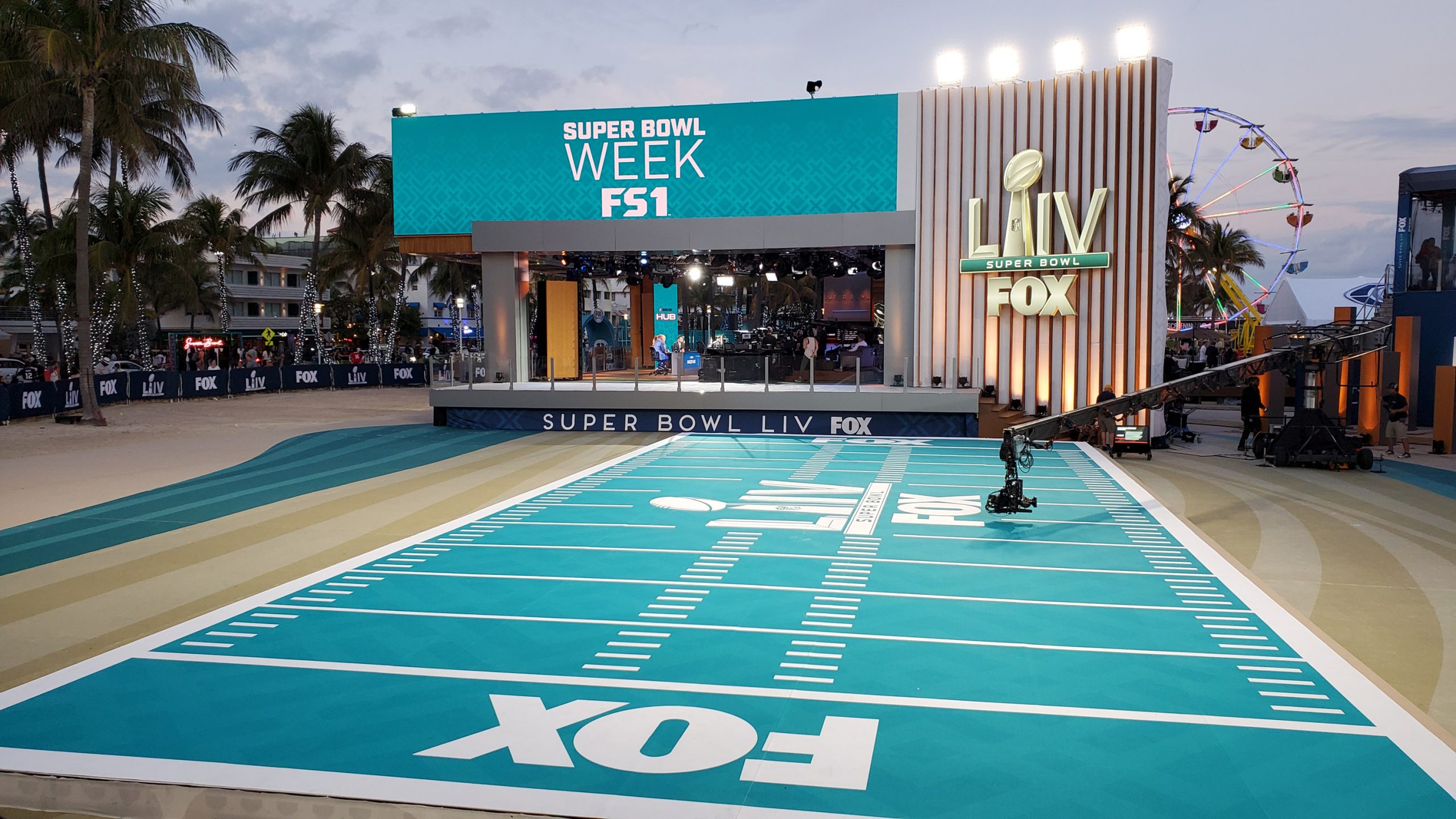 Along with its structural and scenic set design partner Filmwerks, Fox Sports has built what is essentially a temporary Fox Corp. campus that is worthy of the Big Game in both scale and scope. For the sports side alone, the network has erected a pair of 50-ft. by 50-ft. production stages bridges by a small demo football field area coverage is large 1.6 mm LED screens that measure up in total to more than 50 square meters.

“How often do we get acres of beach front property to play with?” laughs Conti. “This is TV, we’re used to working in tiny spaces in New York City or a convention center. This is primo.”

Setting the scene of South Beach was far more challenging a task than simply plopping a set in the heart of the strip. It shouldn’t come as a surprise to anyone who has worked in television production that placing massive structural weight and millions of dollars of gear and personnel onto beach sand isn’t without its obstacles.

Plus, since Fox’s set is set back a bit off of the street of Ocean Drive itself, Conti and his team are utilizing a pair of high-powered camera support systems to help set the scene. A camera on a Strada Crane extends as high as 80 ft. and if offering breathtaking sweeping aerial images of the sets while transitioning smoothly to views of the Atlantic Ocean. Meanwhile, back further inland, a two-point, wired FlyCam system stretches 600 feet along the street the gather in the colors and sounds of Ocean Drive.

The stages are loaded with gear, including a camera complement that featured a pair of RF Steadicams, a RF handheld, and a pair of Technocranes, one measuring 55-ft. high that’s outside on the central football field and a 22-ft. fixture that’s used on the southern-most of the two sets.

Each stage is supported by a control room towards the rear of the room. In fact, each portion of this full structure does an exemplary job of containing everything it needs within a organized footprint, while maintaining clean lines not only for the viewers at home but for those in fans being brought in for live audience of the many programs shooting live here.

There’s more than 10 miles of fiber and five zones of PA speaker systems and one would hardly notice them unless that were pointed out. Set designers took extra care into incorporating real Miami Beach sand for authenticity, while laying down similarly-colored carpet and boardwalk-like wooden boards in the areas where there would be significant crew and talent foot traffic. Blending in the audio wasn’t easy, but Conti found a solution he fell in love with, utilizing an Italian company called K-array, supplied by CP Communications, for thin speaker systems that were installed in the corner walls of the sets, and a special flexible, snake-like speaker strip called an Anakonda that provided inconspicuous in-house audio for the studio audience. 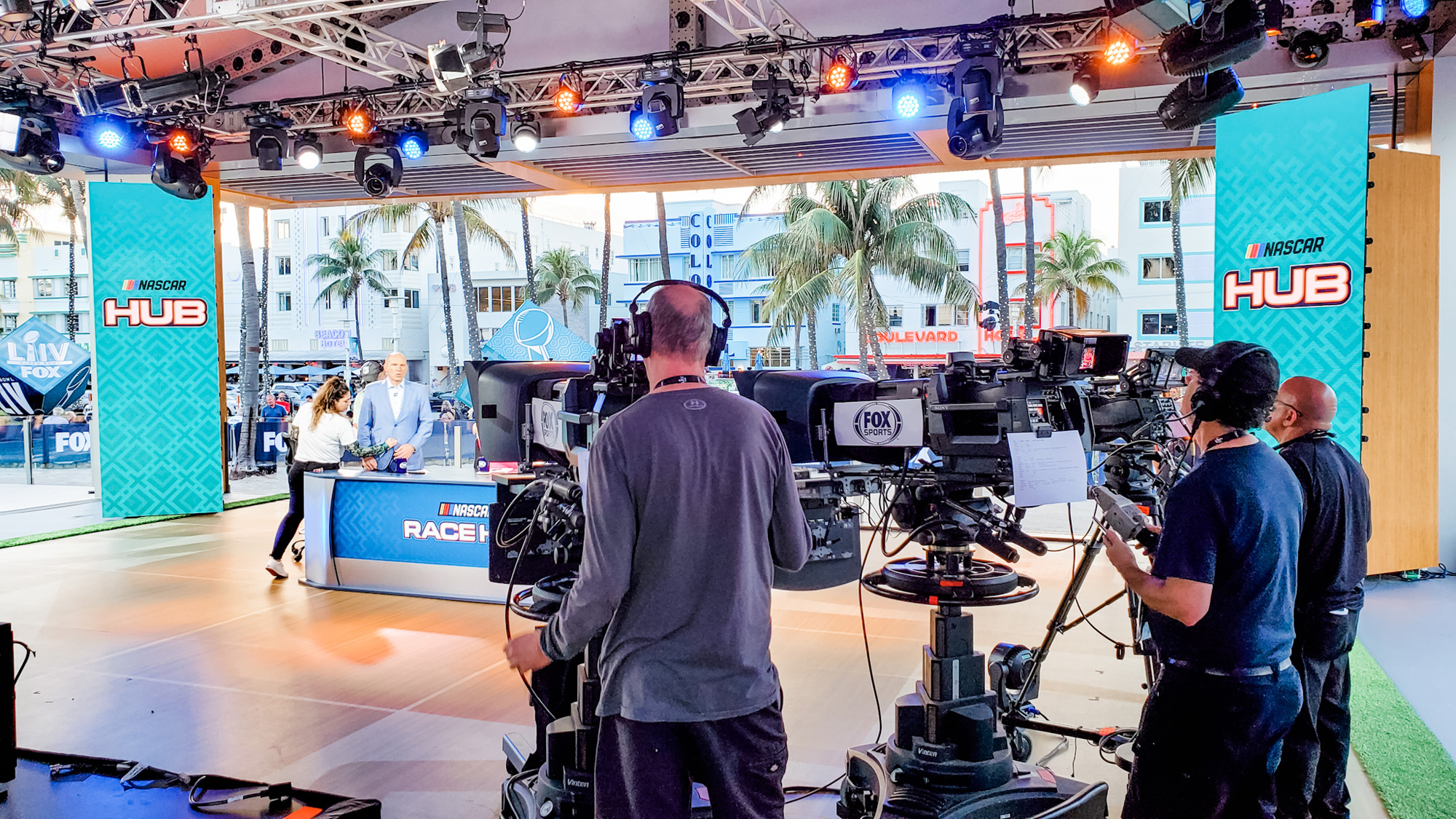 “We wanted to make it all work aesthetically but it’s also completely functional,” says Conti. “Everything is storage or a mini studio of its own. It’s clean. Plus, when you have those big high cameras that pull in cool shots, you can’t be looking down at a mess.”

More than 350+ production, technical and support staff are working here on this impressive campus that began going up way back on January 6. First arrivers raked and matted down the sand before it two approximately two weeks to build the structures themselves before set designers could even begin dressing them. Plus, weather that was unpredictable at time, caused Fox to have to be extra cautious with elements of the build out that could be more dangerous than others.

“It was an ambitious timeline, but not overly tight,” says Brad Cheney, VP, Field Operations & Engineering, Fox Sports. There were definitely spots where we had to play a little bit of catch up because of the wind.”

Fox’s campus at South Beach is supported by NEP Broadcasting’s ND1 series of mobile production trucks. The primary A unit houses a pair of control rooms, while the B unit contains all video and audio, the C unit is filled by transmission and some digital staffers, and the D unit is a hodgepodge of graphics, those overseeing the many big LED screens on the sets, CP Communications staffers managing RF video and audio, and Fletcher executive any robotic cameras.

The full structure also boasts more than 50 square meters worth of 1.6mm LED video wall, including a gigantic screen that bridges between the two main stages.

The campus, while impressive in its own right, is from from a standalone entity. There’s a wealth of connectivity between the various sets here, as well as with Hard Rock Stadium up in Miami Gardens, Radio Row in Miami Beach Convention Center, and Fox Sports’ other home facilities in New York City (they leverage Fox News headquarters), Charlotte, and Los Angeles.

At the South Beach compound, there are 56 transmit paths to five different locations, utilizing satellite, fiber, IP and even cellular. Thirty 30 receive paths from those five 5 locations are coming in over fiber and IP. There’s also 16Gbps of data interconnections on that network.

That level of connectivity has also helped Cheney’s ops team run many at-home production elements to support everything that’s going on at these sets. He says there are, generally, two models of production being done on any given show on the Fox Sports South Beach stages. A majority of programming is sub-switch and sub-mix, meaning a technical director and an A1 are mixing the show alongside a director here at South Beach while communicating with a team in either New York or Los Angeles to insert graphics, run playback, etc. Certain shows, however, like NASCAR Race Hub, which is hosting daily shows on these stages in Miami, are full at-home productions utilizing their home Charlotte facility. Even when game day rolls around on Sunday, major programming like FOX NFL Sunday and FOX NFL Kickoff will be at-home productions with South Beach, the stadium, and Los Angeles.

“We treated this place like we treat the Los Angeles facility in that any control room can be on any stage at any time,” says Cheney. “They can go back-to-back and hop each other and route around.”

Lastly, one of the biggest challenges faced by Fox in South Beach was managing wireless frequency. Cheney noted there wasn’t much frequency in the spectrum to begin with before Fox arrived, and they are utilizing upwards of 40 wireless microphones, 20 wireless IFBs, 24 wireless PLs, and 32 channels of wireless for utility purposes. Plus tie in the fact that ESPN, NFL Network, and a few other media entities are all putting on similar shows in the same area of Miami Beach, all within about a mile of each other.

It all became such a bare that all of the Super Bowl broadcasters actually banded together to hire CP Communications to help frequency manage the entirety of South Beach for everyone.