ESPN Is All About Inside Access on the Field, in the Locker Room

A new era of pro football kicks off this weekend when the XFL opens its inaugural season with a quartet of games on ABC, ESPN, and Fox. The XFL is looking to differentiate its on-air product from more-traditional NFL and college-football broadcasts in three ways: a faster pace, more big plays, and plenty of inside access for viewers. With that in mind, the league has granted ESPN, which will combine with ABC to carry a 22-game slate this season, unprecedented access both on the field and behind the scenes. 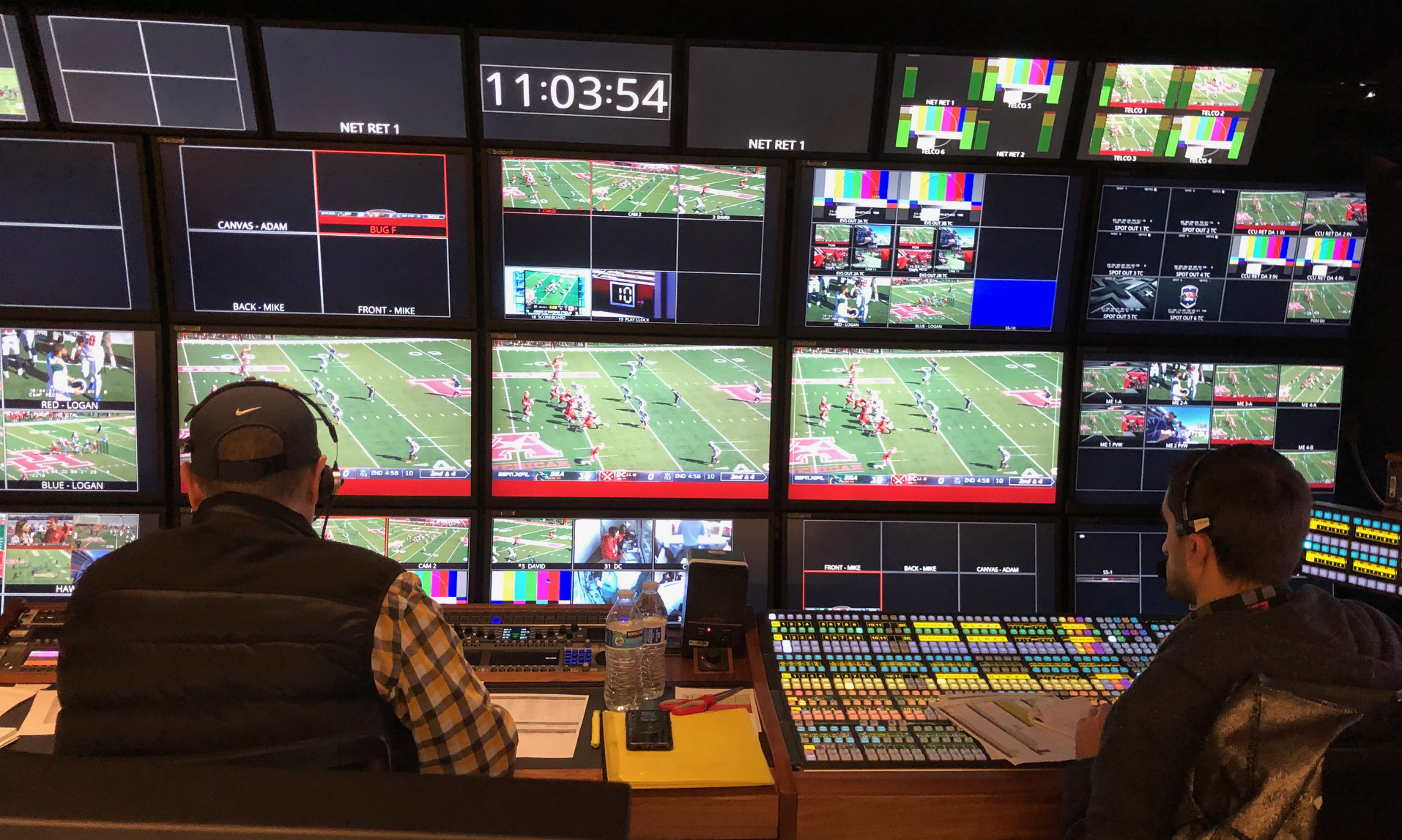 ESPN’s XFL productions will feature RF cameras on the field and more-liberal use of the Skycam during the huddle; access inside locker rooms during halftime; live audio from coaches, players, and officials during the game; in-game interviews with coaches and players on the sidelines; and more.

“I think what’s going to make this product unique is the audio access and the access that our cameras will have to make [viewers] feel like they are truly part of each play,” says ESPN Operations Manager Dick Mullen. “We’re not reinventing [football coverage], but we are excited about these little tweaks that are going to make the game more intimate, with more access to players and coaches, make it quicker with less dead time between plays, and give people an inside look that they’re just not going to see elsewhere.”

New Trucks for a New League: NEP’s Supershooter 9, MTVG’s 46FLEX
ESPN will have the luxury of working out of two brand-new mobile units for this XFL season: NEP’s Supershooter 9, which is making its maiden voyage this weekend (check sportsvideo.org for a full story on the new truck), and Mobile TV Group’s 46FLEX, which debuted for the NFL on Fox last season and is making its first appearance for ESPN. Both trucks are IP-based, with Supershooter 9 (working ESPN’s Saturday games) featuring a Lawo/Arista IP router and 46FLEX (working ESPN’s Sunday game) based on an Evertz EXE IP router.

“One of the main factors in deciding which trucks we were going to go with was the fact that both trucks are IP-based trucks,” says ESPN Remote Operations Specialist Brian Ristine. “That allows us to take a brand-new product in the XFL and bring it into the most current and cutting-edge technology. You have the opportunity for growth with IP, and you break the proverbial barrier that you had with traditional baseband infrastructures. It allows you to remain flexible, and it leaves a large potential for expansion in the future.”

All of ESPN productions (as well as Fox Sport) will be in 1080p, and both the Saturday and Sunday games will have nearly identical equipment levels.

“Internally at ESPN,” says Ristine, “we’ve been trying to migrate as many of our properties to 1080p as possible, and, since this is a fresh start for the XFL, we made the effort to bring it to 1080p right from the beginning. We also are treating both games with the same equipment and facilities levels, rather than as an A and B game. The only major difference between the two games is going to be the production teams.”

Camera Coverage: RF Handhelds, Skycam Go Inside the Game
In terms of the camera complement, ESPN will deploy traditional positions for game coverage, including three mid-level game cameras, a low- and high-end zone, a cat camera, a cabled handheld, and a Skycam wired aerial system. However, the coverage will stray from the traditional football-coverage philosophy with a pair of wireless RF cameras (provided by CP Communications) that will have unlimited access to the field of play, the sidelines, and the locker rooms.

“The RF cameras are going to be very heavily relied on,” says ESPN Associate Operations Manager Leigh Michaud. “We are going to be able to go right onto the field of play, into the coach’s box, into the locker rooms, and be able to do interviews with players and coaches during the game. I think that a lot of our most unique looks are going to come from those handheld cameras.” ESPN will also have unmanned cameras in the coach’s booth and in the officials’ replay booth.

ESPN will deploy a Skycam just as it does for Monday Night Football and its top college football games. However, the XFL is expected to grant the camera much more freedom to traverse the field before and after the play compared with the NFL and college.

“In terms of the Skycam, some of the things that are verboten with almost any other football league will be welcomed in the XFL,” says Mullen. “Traditionally, on an NFL or college football game, the Skycam can’t get too close to a huddle or to a player. But, with the XFL, we expect to see the Skycam getting down low and hanging right over the top of that huddle to get a better look at what’s going on in there.”

ESPN’s creative-services team has also built a brand-new graphics package for the ABC/ESPN coverage, and longtime partner SMT will provide the 1st-and-Ten Line virtual-graphic system, which will be available on Cameras 1, 2, 3, and 4 (it will not be available on the Skycam).

Audio Coverage: Coach Comms, Player Mics, and Inside the Replay Booth
In addition to more freedom for the cameras, ESPN will have access to plenty of behind-the-scenes audio from coaches and players for its broadcasts.

“What’s really exciting about XFL is the access they’re allowing us to the players and coaches,” says Mullen. “We will be able to tap right into the coach comms system, and we will have mics on several players on the field. “

ESPN will have direct access to the XFL’s coaching comms system (provided by Riedel Communications) and has a four-wire intercom circuit so that announcers and the production truck can have two-way communication with coaches during the game.

In addition, four players on each team — two on offense, two on defense — will be outfitted with RF microphones (provided by CP) to capture in-game audio during plays.

“We’ll also have our own complement of wireless microphones on the side of the field,” says Ristine, “and we are planning on using a boom microphone to get more audio of the players coming on and off the field. We’re going to try to get more intimate and cover the audio on the field as closely as we can.”

ESPN will have a feed directly from the XFL’s Sony Hawkeye replay system so viewers will see exactly what officials see as they’re looking at replays and have direct communication with the replay official supervisor so they can describe what they’re looking at in real time and how they made their decisions.

Sideline Access: Up Close and Personal With Players and Coaches
In addition to the RF cameras covering the action on the sidelines, ESPN will deploy a far-side 50-yard-line camera that will shoot back at the near-side bench to better capture the activity of coaches and players during the game. XFL is also making each team’s PR director directly available on the field to help secure players and coaches for in-game interviews immediately after a big play on the field.

“We have eight fairly well-known coaches in this league,” Mullen notes, “and each one of them has been really receptive to the idea of having a camera in their face throughout the day. That’s not something that the average coach will deal with well, but we have some characters in this league who will be revealed during the season because they’re going to be on the air so much.”

ESPN, along with Fox Sports, completed a rehearsal during scrimmages at the University of Houston’s TDECU Stadium (home of the XFL’s Houston Roughnecks) last month, allowing production and operations team to get a feel this new all-access style of football coverage.

“One thing that I took away from the first game of the rehearsal was when a player was ejected from the game and we were able to interview him immediately after his ejection,” says Michaud. “The emotion pouring out of him was really interesting to see, and I think the production team is very excited to have the chance to interview a player right after he makes a big play and get firsthand comments.”

A New Style of Football Broadcast: Fast and Furious
In addition to big plays and inside access, the XFL is focused on speeding up the pace of play for its games. With that in mind, ESPN will be working with a three-hour TV window (vs. four hours for an NFL or college game), and it will not host a formal halftime show since XFL halftime periods will be just 10 minutes including commercials.

“The games are very compact because the XFL is looking to have less downtime in the game,” says Mullen. “Since the halftime will be so short, all of our programming will be done onsite from the booth. That said, we will have full access into the locker rooms at that time, so plan to be in the locker rooms to see the adjustments and discussions in there, which will be very exciting.”

More than two years after plans for the XFL were announced, the league will finally take the gridiron this weekend. Inside the truck, producer Josh Hoffman and director Anthony Demarco will handle the Saturday games; producer Mandy Cohen and director Bob Frattorali will man the Sunday games. ESPN Coordinating Producer II Bill Bonnell and Senior Production Manager Vic Morren are overseeing the productions. Although many viewers may not know what to expect, one thing is for sure: the XFL will be a whole new kind of football-viewing experience.

“The XFL has listened to what the fans want and has created a game that is made just for them,” says Michaud. “To able to deliver that vision on television is really exciting. We’ve got a lot of unique and interesting things planned, and I think people are going to want to keep watching after they see that first game.”