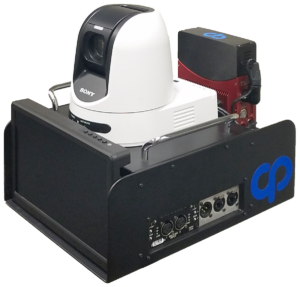 The CamSTREAM2B from CP Communications can be mounted on a tripod or table.

In the past four months the sports production community has been on a fast track when it comes to learning new workflows and production techniques. One of the biggest is the use of systems like Zoom and other video conferencing tools to handle interviews and commentary. Increasingly there is a desire to move beyond a basic Webcam and that is one of the reasons CP Communications has rolled out two second generation Red House Steaming (RHS) live production systems: CamSTREAM2 and CamSTREAM2B.

The all-in-one packages, which integrate a Sony SRG-360SHE PTZ camera with 12-20x optical zoom (other Sony PTZ cameras can also be used), a Mobile Viewpoint Agile Airlink encoder, a return video monitor and connections for audio, can attach to the top of a tripod or be set on a table top. The user then flips two switches to the on position to obtain power and begin shooting.

Jerry Gepner, CP Communications, COO, says that the goal is to give production teams an easy to deploy system that also has color coded cables and a single power button so that on-air talent doesn’t have to grapple with a difficult setup.

“The camera in a laptop running through the broadcast center won’t have an output that will look so good,” says Gepner. “We can bring broadcast quality at up to 16 Mbps which, with h.265, is broadcast quality.”

Available to rent or purchase, both systems support content acquisition, on-board recording and live streaming in fully integrated, turnkey packages, with CamSTREAM2 built for ProAV productions and CamSTREAM2B for professional broadcasts. Both systems are configurable to serve cloud streaming and user-hosted playout workflows.

“We built our second-generation STREAM systems to reflect customer feedback, including the demand for more streamlined workflows and a cost-efficient at-home production model,” says Kurt Heitmann, CEO, CP Communications. “These systems will allow content providers to shoot and stream broadcast-quality video direct to Facebook, YouTube, a CDN, and/or studio-based playout servers with virtually no advance labor or local production expenses.”

Ease of setup represents the main departure from first-generation CamSTREAM systems. The new systems simplify and accelerate configuration for content creators, and cede production and control operations to remote CP Communications technicians as the user calls an 800 number to finalize set up.

Gepner says the unit’s 10-inch HD monitor can be used as return, a way for the interviewer to see an interview subject, or even as a prompter. There is a mic input as well as IFB output.

“It can feed a return off of the bonded cellular transmitter and the talent can react in near realtime,” adds Gepner.

Once shooting commences the Agile Airlink device streamlines connectivity by bonding WiFi, Ethernet and mobile data paths into a single, robust H.264 or H.265 transmission stream. The CP Communications team picks up the production from their network operations centers (NOCs) in New York, Florida or Nova Scotia from there, with remote control and management supported through Mobile Viewpoint’s LinkMatrix system.

Both systems include the Sony camera and Mobile Viewpoint systems, along with wired or wireless microphones and IFB systems, as well as HDMI outputs for return video and autocue. A second video input provides capacity for a second camera or a gaming device. The CamSTREAM2B system strengthens technical capacities to support live sports and broadcast productions, adding full remote PTZ control (via a joystick controller), camera paint control, and remote audio functionality, including the ability to control gain structure.

“Anyone that can remove a TV from a box, set it on a tabletop stand, and plug in a power cord can operate either system,” said Heitmann. “We wanted to innovate solutions to accommodate everything from corporate events, city council meetings and worship services to remote news shoots, sports productions and live performances – all while eliminating the technical headaches and embracing the cost-efficiency of remote production from our NOCs.

“There is no need to manage travel expenses for on-site production crews with these systems,” concluded Heitmann. “There are truly nothing else like these systems on the market today.”

Adds Gepner: “Talent and commentators can operate remotely and be every bit as effective. And the technology allows us to do it with high enough quality and low enough latency.”