A seemingly modest addition to the camera arsenal for the Sunday-afternoon Seattle-Washington NFL game caught the attention of viewers and sports-video–production professionals alike.

In place of a traditional Steadicam, the onsite crew deployed a Sony mirrorless camera (the a7R IV, to be exact) on a Ronin-S handheld gimbal to capture end-zone shots following scoring plays. The shallow depth of field delivered visuals that had never been seen in a live NFL game broadcast — and viewers noticed. 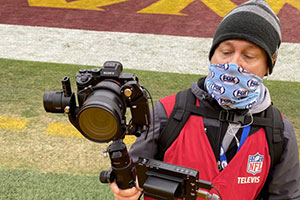 Some called the images it delivered cinematic. A few compared it to the look of a videogame. Generally speaking, though, it was very well-received.

“This camera isn’t ordinarily made to shoot live video,” says Mike Davies, SVP, technical and field operations, Fox Sports. “It certainly does a great job of shooting beautiful video but is not typically used for live. We were astonished by how much this was recognized. Certainly, we liked it, and people on our crew have been working with it all year, but we didn’t know your ordinary viewer would see such a difference sitting on their couch. It’s fantastic.”

The camera, run by veteran camera operator Mike Smole, was outfitted with a Sony FE 24-70mm f/2.8 GM lens, which — while shooting in HD and using in-camera autofocus — delivered the shallow depth of field that differentiated the image in such a unique way from the other broadcast cameras on the show. From the rig, the video signal was shipped to the truck via a 1080p wireless transmitter provided by CP Communications.

The idea to roll out the mirrorless as the 11th camera in the game’s arsenal on Sunday was spurred by freelance technical director Jarrod Ligriani. According to Davies, Ligriani, who also directs and TDs Colorado Rockies and Vegas Golden Knights games for AT&T SportsNet Rocky Mountain, had been giving the rig to crew members to shoot pregame warmups, tunnel walkouts, and other pregame content throughout the season. Loving the images it captured, he looked for a time and a way to weave the unit in as a live broadcast camera. This week — with the assistance of tech manager Jay Johnson, game director Bryan Lilley, and CP Communications — that became a reality.

“It wasn’t a thing we made a big deal about,” says Davies, “but all credit goes to this crew for seeing something that really worked, pushing it into the limelight, and using it so effectively.”

Although the images were eye-catching, none of the technology was new — and Davies acknowledges that. A mirrorless camera paired with a stabilizing gimbal is widely used by sports-video creatives, largely to capture digital, social, and other postproduced content. This was, however, a unique deployment of a common piece of sports-video technology for an event of this size and magnitude.

Working the look into the show wasn’t too much of a challenge, even though the camera offered a very different perspective from the other cameras in the lineup. For the shaders and video engineers in the truck, Davies notes, most of what the camera was contributing was out of their hands.

“Obviously, you’ve got to flip it through a color corrector of some kind,” he says, “but we feel [that] cameras that look so different from other cameras [on the broadcast] while painting with ultimate control are every video engineers’ dream. One of the things we were fairly impressed with was that the camera seamlessly cut into the rest of the cameras, despite being a totally different device. In time, we might be able to find some hooks and handles, but, altogether, the only control you have over a camera like that is the color corrector on the backend.”

The mostly positive reception has certainly not been lost on Fox Sports and the crew. Davies expects the rig to be deployed throughout the remainder of the NFL season. In fact, the crew that worked the Seattle-Washington game this past weekend will be in Dallas on Sunday for Eagles-Cowboys and, according to Davies, has the green light to go with the rig again.

Davies also sees tremendous potential for mirrorless cameras to be used in more sports, such as baseball, boxing, and even NASCAR.

“The future of this camera is pretty wide,” he says, noting the significant cost saving (the rig in total amounts to approximately $10,000) and the relatively simple learning/training curve. “The ethos at Fox encourages this type of innovation on the ground. It doesn’t matter where an idea comes from. We’ll take it. I’m just really proud of this crew, and it’ll only get better from here.”