The COVID-19 pandemic has had little effect on new studio designs — or the total budgets allocated for them — although many will not be used to their full capacity until normal working conditions return.

Video walls are increasingly focal points in studio design, and vendors are incorporating various strategies into their studio designs for news, talk, sports and esports. Requests for home studio support have tapered from the initial work-from-home flurry, while at the same time, vendors are offering their own remote production studios to customers. And corporate demand for studios has surged, creating a growth area for studio designers.

“We’re designing sets as if COVID is going to go away,” he says.

Jim Fenhagen, EVP, design for Jack Morton Worldwide, says one of the impacts COVID has had is on spacing out the seating arrangements.

“Prior to COVID, we were trying to make more intimate-type desks instead of these big battleships” to accommodate social distancing, Fenhagen says. One solution is to create a desk that will “return to normal” by using add-ons or extensions that allow for social distancing.

JMW had created an election desk for CBS that would fit five people before COVID but only three people with social distancing, Fenhagen says. That desk was later customized for COVID conditions with the addition of “wings” on either end of the desk to accommodate five people.

“There’s so much you have to figure out before the install team gets there,” says Diane Fiolek, VP-creative services director, Devlin Design Group. The teams “want to keep safe, the clients want everyone to be safe, and it takes a lot of planning.”

One of the trends Fiolek has noticed is that more broadcasters are embracing LED elements in their studio design as the prices for those products drop.

Video walls are also getting “bigger and bigger,” with video taking up as much as 50% of the set surface, McLaughlin says. “That’s only going to continue.” 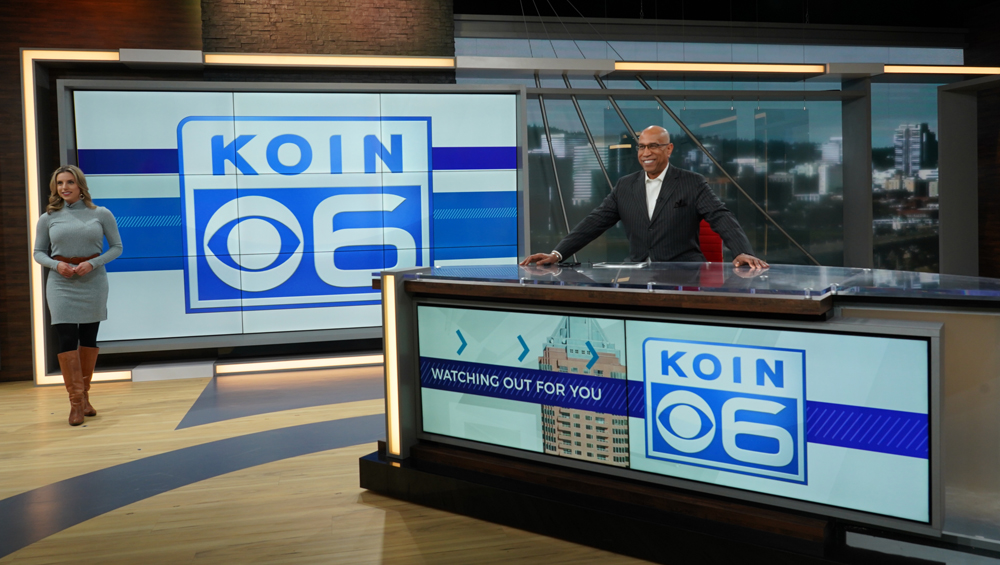 The studio FX delivered in 2019 for Nexstar’s KOIN Portland, Ore., won gold for set design in the Promax 2020 North American Station Awards. One of the central elements was a large video wall.

FX recently delivered studios for Nexstar’s Tampa, San Francisco and Memphis stations, and all three are “heavy on video technology as the background,” he says.

Tampa’s space, when Buccaneers video is played on the screens, “looks like ESPN, not a news studio,” but during a hurricane, every screen could feature hurricane information, McLaughlin adds.

Related Story Democratic Convention Postponed Until August
Video walls create more ways for broadcasters to visualize a story, McLaughlin says, but they also require additional content to feed the walls and staff to support that.

And while overall budgets for studios remain “about the same,” video is “sucking up a bigger chunk of the budget,” from about 10% of the budget to 50%.

Video walls can also be a great equalizer for small-town stations, he says. Historically, these broadcasters may have been competing with a few other stations, but now they are competing with a plethora of cable and streaming options.

“Some are high-end splashy things, and you’ve got to look like you’re in the same league with them,” McLaughlin says.

Fenhagen says some broadcasters are opting for more robotic cameras to be added to their designs. Some of the robotic cameras “have gotten so small and high-res” that they can be tucked into the design while also reducing the requirement for camera operators.

For example, sports sets are larger because often the people occupying the desks are larger, Fenhagen says.

Even though esports studios have features common to news studios, such as desks, lights, fixed camera positions and possibly a green screen area, there is less automation. Signal processing is another area that is different with esports studios because new graphics cards are “capable of crazy frame rates and frame rates can fluctuate” depending on rendering requirements, Reed says.

Fiolek says esports studios often want to look different from other types of studios because they appeal to a different kind of clientele. Devlin recently delivered a new studio for the Tennis Channel rebrand that launched in January. Historically, the channel had been “more traditional” and “buttoned up,” but the rebrand “changed the way they shoot, the way they think about shooting and the energy of the talent is upped,” Fiolek says.

Sometimes, she says, that might mean using a different texture or employing an edgier desk design.

Designers and broadcasters have had to think creatively during the pandemic, as much of the talent was forced to work remotely. Nearly a year ago, most broadcasters were seeking out equipment to set up home studios and support remote workflows.

Related Story Judge Accepts Loughlin’s Bribery Plea Deal
With time, though, some shows have started returning to their studios. The Late Show with Stephen Colbert was telecasting from home for quite some time, for instance, when CBS decided to move operations back to the Ed Sullivan Theater. Yet, operating in a big theater without a studio audience didn’t seem like the right feel, so JMW “recreated his office with some enhancements” in the studio, Fenhagen says. “We almost created a home studio but in a real studio.”

While some talent are returning to official studios, some home studios still need to be set up.

Kurt Heitmann, CEO of CP Communications, says the trouble is that most of the time the talent are “folks who don’t deal with technology, they’re handed technology. They don’t know a talk back switch from a mute button.”

As such, he says, a home studio in a box needs to be as simple to set up as possible, and that’s what CP’s goal was with its Cam STREAM set up.

“We made it simple, and that’s what an at-home studio should be,” Heitmann says.

CP’s Red House Streaming Studios in St. Petersburg, Fla., is one such example. The studio is a component of the overall IP production workflow.

“We do the heavy lifting,” Heitmann says. “We manage the workflow through the cloud and our production management tools and distribute it to the destination.” 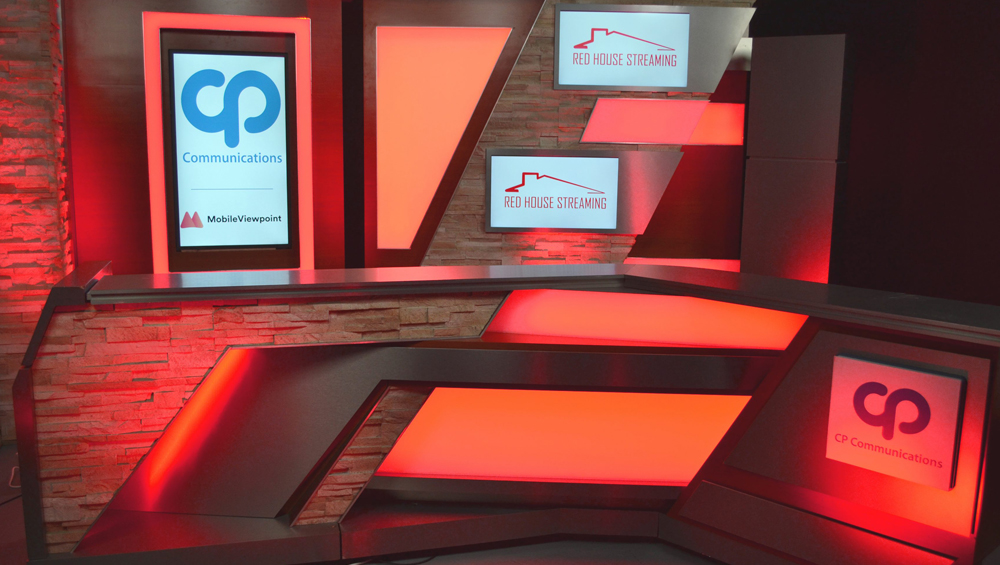 Ross Video is building a studio near its Ontario facility that will be available to customers for remote operations. Ross will produce season three of its Ross Live webinars at the new fully-functional studio facility, says Kim Hogeveen, global events manager for Ross Video.

“We’re using a ton of Ross technologies” in the new facility, which will feature a hard wall section as well as a green screen, she says.

Ross currently has studios in “customer experience centers” in Ontario, Singapore and Redding, U.K. Hogeveen says that in pre-COVID days, customers received training and tested equipment in the centers, but now that has been replaced with online demonstrations and controlling equipment remotely.

One of the big growth areas studio designers have seen in the last year is in the corporate market because live corporate events have “died because of COVID,” Fenhagen says.

Fiolek says, “Everyone’s been Zooming, they’ve been on camera talking to teams and groups of people, they’re at that point where they’re upping their game.”

These businesses want to create in-house studios that offer a level of professional quality and feature LED screens, perhaps a desk or an interview area and other elements often seen in newscasts, she says.

“They’re taking their communications and really taking it to the next level,” Fiolek says.