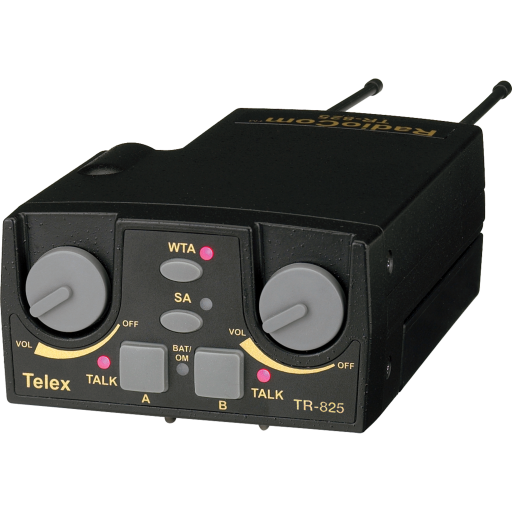 Turns the beltpack power on and controls head set volume.

When pressed, the userÃ¢â‚¬â„¢s audio is disconnected from the wired intercom, auxiliary input/output and the base stationÃ¢â‚¬â„¢s local headset. Other beltpack users, on that audio channel, can hear the user as normal.

Allows user to select either audio channel A or B.

LED is on when the talk button, SA or WTA is active.

Press to enable the audio path from the local headset microphone. The Ã¢â‚¬Å“TALKÃ¢â‚¬Â LED, #6, will turn red when enabled. A quick press and release latches the talk function, unless latching has been disabled. Holding the button for over Ã‚Â½ a second will cause the audio path to be enabled only for as long as the button is held. If the talk function is latched on, pressing the talk button again will turn it off.

The RTS TR-825 is a Two-channel UHF frequency-agile wireless beltpack for use with the BTR-800. The TR-825 is a dual listen and dual talk beltpack, allowing you to listen to “Tech” in one ear and “Production” in the other. Individual volume controls also allow for easy level adjustment. The TR-800 has an all metal cast magnesium case, an LCD based graphical user interface, stage announce activation, wireless talk around (ISO) activation, enhanced ClearScan, detachable antennas and an auto-sensing headset connector that automatically switches between electret and dynamic headset mics.

We’re ready to help you take your broadcast to the next level.